Obstacles to the Gospel 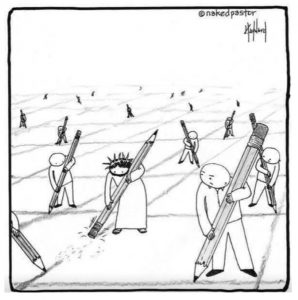 You may have seen the cartoon below on social media this week. It depicts a page full of people, each in their own box, drawing lines, borders, boundaries, designed to keep others out. And there in the middle is Jesus, a crown of thorns on his head, sandals on his feet, quietly erasing those lines, breaking down the walls that separate us.

The cartoon is in response to this week’s decision by the United Methodist Church to continue its policy of not ordaining gays and lesbians, and not permitting its clergy to officiate at same-sex weddings. The decision comes with stringent penalties for those who dare to break these rules.

There is a temptation to look at our brothers and sisters in the Methodist Church and think, “Thank God we have moved beyond those issues.” And indeed, the Episcopal Church has made great progress in the inclusion and acceptance of all God’s children. Our national church canons on ordination and marriage now apply equally to all our members. There are no prohibitions based on gender or sexual orientation.

But we as a denomination are far from perfect in our attempts to live out the gospel. I was at our own General Convention in Salt Lake City in 2015 when our marriage canons were changed to allow same-sex marriages (the same week that the Supreme Court made such marriages lawful throughout the country).

But at the insistence of the House of Bishops, that vote also contained a “conscience clause” which allowed individual bishops who opposed same-sex in marriages to prohibit clergy in their dioceses from officiating at them (apparently the bishops were not concerned about clergy in those dioceses whose consciences told them the sacraments of the church should be available to all their parishioners). Fortunately, that decision was changed at the General Convention last year.

However, just last week there was new evidence that discrimination is alive and well in the Anglican Communion, the worldwide network of churches, including the Episcopal Church, with roots in the Church of England.

Every 10 years the bishops from throughout the world are invited to come to England for what is called the Lambeth Conference, hosted by the archbishop of Canterbury, the symbolic head of the Anglican Communion. Traditionally, bishops’ spouses are also invited to the conference.

Last week, Justin Welby, the current archbishop of Canterbury, announced that the spouses of bishops in same-sex marriages would not be invited to attend next year’s conference.

As of now there are three bishops who are affected by this decision, two in this country and one in Canada. But this exclusion should be of concern to every bishop, and every Christian.

The Lambeth Conference has a long history of exclusionary behavior. Twenty years ago there was debate over whether women bishops would be invited. Ultimately, they were, but some of their male counterparts refused to attend, and others refused to be in the group picture if they women were included.

At the last Lambeth Conference in 2008, Gene Robinson, the then-bishop of New Hampshire and the first (and at that time only) openly gay bishop, was told by the archbishop of Canterbury that he was not invited.

Welby’s exclusion of same-sex spouses next year may have been in response to a “warning” issued by the archbishop of Nigeria, who said that if same-sex spouses were invited “we have to conclude that the Lambeth Conference of 2020 will itself be an obstacle to the gospel by embracing teaching and a pattern of life which are profoundly at odds with the biblical witness and the apostolic Christianity through the ages.”

I beg to differ with the archbishops of Nigeria and Canterbury. Any study of the teachings and actions of Jesus show that exclusion of those who are marginalized is always contrary to the gospel. Jesus was always reaching out to those who were cast aside by the religious authorities of his day.

Then, as now, the obstacles to the gospel are most likely to come from the religious authorities. While Methodist and Anglican leaders are treating faithful Christians as “less than,” Jesus can be found with those they disdain, assuring them that in God’s kingdom there are no exclusionary lines.

The holy season of Lent, a time of penitence and preparation for Easter, begins Wednesday, March 6. We will have services at noon and 7 p.m.

“Who Killed Jesus?” Reading the Passion Narratives in a Non-Negating Way

The title for our Lenten Adult Education class, led by Joe Monti, comes from John Dominic Crossan’s book, Who Killed Jesus? Exposing the Roots of Anti-Semitism in the Gospel Story of the Death of Jesus (Harper, 1995). Although Crossan will be our guide, I will suggest some differences in our approaches. Some of you will remember Professor Crossan’s visit and lectures at St. Bede’s and St. Dunstan’s during Lent about eight years ago.

Once again this year we will be collecting money during Lent to replenish what is known as the “St. Dunstan’s Medical Fund” at Msalata Theological School in Tanzania. This effort began about 10 years ago, when we sent money to buy mosquito nets for students and others in the community. Tanzania has one of the highest rates of death from malaria in the world. Over time that has expanded to other health-related costs. Each year we send $5,000 to the school’s medical fund. That is used to buy mosquito nets, medicine (including for malaria), a nurse to make regular visits to the school, and eye glasses for students and others in the community.

The national church is not making the traditional “mite boxes” in which to collect money during Lent this year, but we urge everyone to set aside some money each day or week for this important ministry. Maybe you’re giving up something for Lent, and can instead donate that money to Tanzania. Or give in gratitude for ways you are blessed. We will collect the money at Easter, and send it to Tanzania this spring.

Stations of the Cross for Holy Week

Stations of the Cross is an ancient walking and meditative spiritual practice in which we retrace the final steps of Jesus on his path from condemnation to crucifixion and death. Each of the 14 stations marks a point along the way.

St. Dunstan’s has—or had—Stations of the Cross on the nature trail around the perimeter of our church property, perhaps forgotten in recent years. But there is an effort afoot (yes, pun intended) to revive them, to renew both the stations themselves and the spiritual practice of walking the Stations of the Cross during Holy Week. Group walks will be scheduled between Palm Sunday and Good Friday, and individuals will be able to walk as their own private practice any time.

Billy DuBose, our seminarian, is looking for people interested in making a cross for one of the stations. Please talk, text, or email him with your ideas and interest. Expect to hear more plans and development: Billy DuBose
(803)256-3544, wpdubos@emory.edu.

“Jesus is a person and, at the same time, a process. Jesus is the Son of God, but he is also “the Way”—the way of the cross. He’s the goal and the means.” –Richard Rohr

One of the joys of being rector of St. Dunstan’s is taking communion to people who are not able to come to church, whether it be because they are in the hospital or recovering from illness or surgery, or because they no longer drive or are not able to easily get out anymore.

Some of you may remember that the last time I went on sabbatical this taking of communion was done by parishioners, with the lofty title of Lay Eucharistic Visitors.

In anticipation of my sabbatical this summer, we are re-instituting that ministry. However, we’re not waiting until I am gone to do so.

The first Sunday of Lent, March 10, we will commission our new Lay Eucharistic Visitors. Each Sunday one of them will take communion to someone who is not able to be with us. Right now we have four parishioners who I regularly visit – Betty Whittier, Helen Bealer, Sheila Woodard, and Nancy Young (who is cared for by her sister, Pat Berman). Now they will all receive communion from a fellow parishioner once a month, in addition to my visits.

Each Sunday we will say this prayer as we send the LEV forth:

“We send you forth bearing these holy gifts that those to whom you go may share with us in Christ’s body and blood. We who are many are one body because we share one bread, one cup.” Amen.

Please consider attending Meals With Meaning, a fundraiser for Family Promise, on Thursday, March 21st at Heritage Sandy Springs from 6-9 p.m. Tickets are $50 for a Southern style dinner with wine, beer, and iced tea. The evening will also include live music, a raffle, and testimony from a family who has graduated from the program. You may purchase tickets at Family Promise Events.

Many, many thanks to Gilda Morris, who for many years has headed up our dinners at Holy Comforter, and is now stepping down from that role. And thank you to Pam Weed for stepping in to carry on this ministry.

Children are an integral part of the music program at St. Dunstan’s. Like our Sunday morning Christian education offerings over the years, music for children has taken various forms depending on the available children, and of course, the interest of their parents. Here are just some of the ways St. Dunstan’s children have made music in recent years:

It was a privilege to work with Quinn Changus as she prepared for her college auditions as a vocal performance major, and with Joseph Henry Monti in presenting his beautiful solo recital, attended by about 95 parishioners, friends and supporters.

When our young singers leave for college, they are always invited back to sing with the Parish Choir. It was great to have James Robertson in the Christmas Eve choir.

These are various ways that St. Dunstan’s children and youth have engaged with music in the past, but what about our future? Children’s music at St. Dunstan’s will continue to take the shape and form that is appropriate for the children we have. Is it time for a new group of Junior Choristers? or Senior Choristers? Parents, please let me hear from you. tom@stdunstan.net, or
205-305-8208.

Gwen McAlpine and Paul Zimmer on the death of Gwen’s sister, Karen Swartz.

Billy and Sarah Hancock on the death of Billy’s brother, Fred Zeigler.

Joe Monti on the death of his cousin, Angelo Vigilante.

And we remember Jane Lamkin and Toddy Erickson, two former long time parishoners of St. Duntan’s who died in February.

Sundays at St. Dunstan’s are not possible without a large number of volunteers. There are plenty of opportunities to lend a hand. Feel free to contact the following people to get more information on ways you can help.

God of the wilderness,
your Spirit leads us to face the truth,
unprotected and exposed:
In our times of trial
help us to resist
the worship of empty power
and the illusion of invulnerability,
that we might find our true food
in Jesus Christ, the broken bread.
Amen.