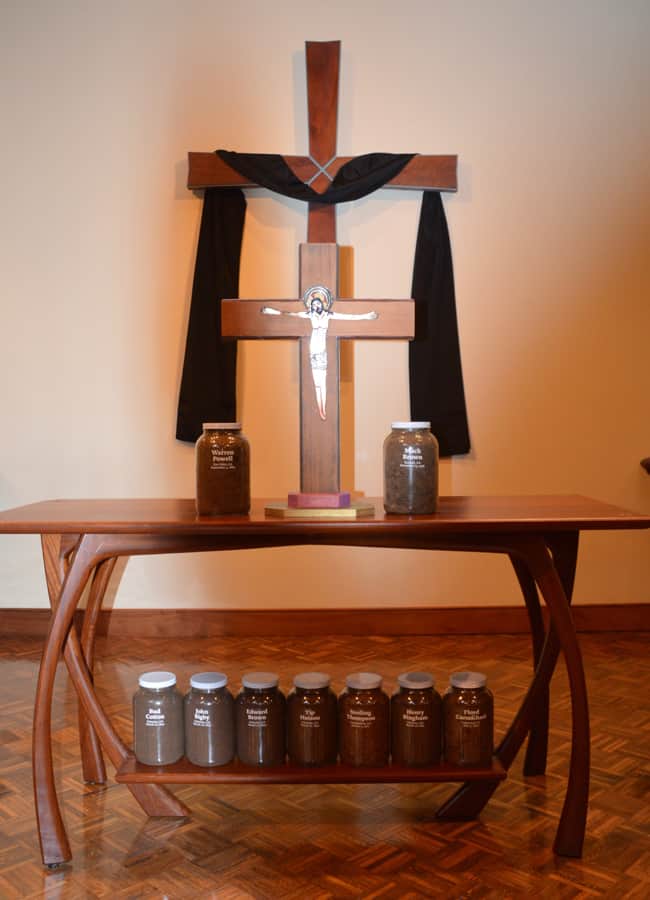 The cross and the lynching tree.

Those two images have been with me throughout Lent this year, intertwined with each other in a profound way.

We are here tonight to remember and grieve the death of a man we believe was the incarnation of God, who was betrayed, arrested, stripped of his clothing and his dignity, humiliated, beaten, then nailed to a tree and left to die, while a gathered crowd jeered and mocked him as he hung in agony.

The crucifixion of Jesus, the cruel and brutal way in which he died, is at the heart of the Christian faith. Every year on Good Friday we hear the agonizing story of his death.

On our altar tonight, the crucified Jesus is surrounded by nine jars of dirt, sacred soil collected at some of the sites where black men, created in God’s image, were lynched in Fulton County. 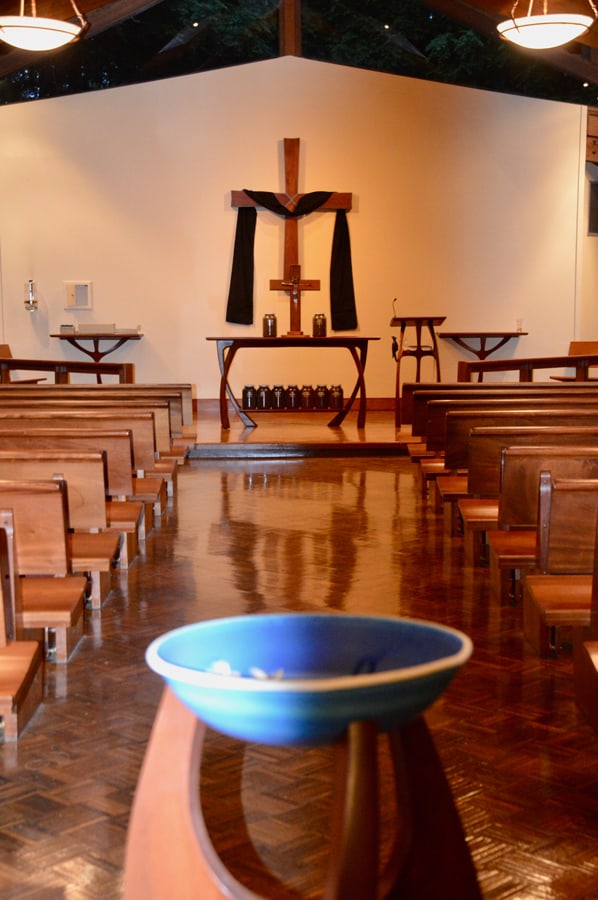 These are nine of the 35 African Americans lynched in this county between 1877 and 1950, nine of the more than 4,400 of our black brothers and sisters, God’s beloved children, lynched in the South during that time. Tonight we remember and grieve for them, too.

“Both the cross and the lynching tree were symbols of terror, instruments of torture and execution, reserved for the lowest of the low in society,” theologian James Cone says.

“In both cases, the purpose was to strike terror in the community. It was to let people know the same thing would happen to them if they did not stay in their place.”

The story of the crucifixion is hard to hear. That’s why there is a fraction of the number of people in church this evening compared to the number who will be here on Easter morning.

Most of us would rather just skip from Palm Sunday and the story of Jesus’ entry into Jerusalem to the glory of Easter morning and the resurrection, without thinking too much about what happened in between. 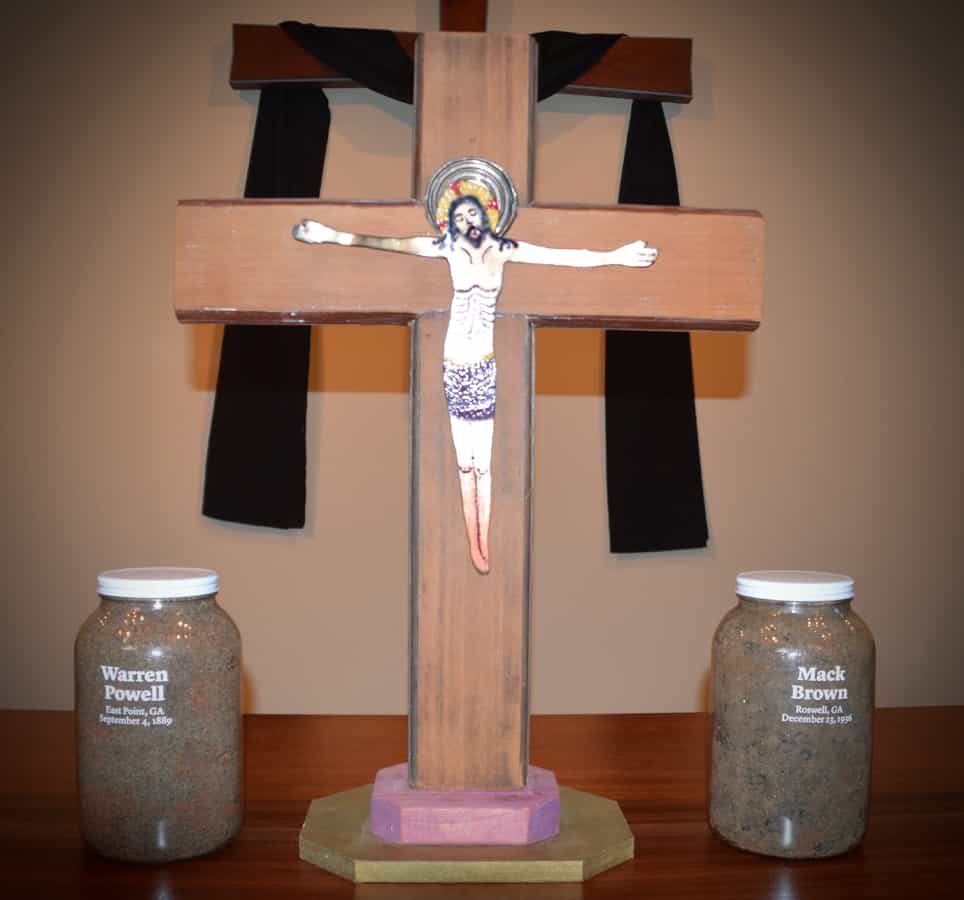 We prefer the empty, liberated cross to the blood-stained one with Jesus hanging in agony, an image we would just as soon forget.

In the same way, many of us would just as soon forget the stories of lynching and racial terror that haunt our country.

Almost 2,000 years ago, God turned the cross, the instrument of defeat and death, into a sign of liberation and new life.

“The cross is the most empowering symbol of God’s loving solidarity with the ‘least of these,’ the unwanted in society who suffer daily from great injustices,” Cone says. “Christians must face the cross as the terrible tragedy it was, and discover in it, through faith and repentance, the liberating joy of eternal salvation.”

But, Cone quickly adds, “we cannot find liberating joy in the cross by spiritualizing it away, by taking away its message of justice in the midst of powerlessness, suffering, and death.”

The cross needs the lynching tree, Cone says, to remind us of the reality of suffering, to keep the cross from becoming a symbol of abstract, sentimental piety.

And the lynching tree needs the cross, he adds, “to point in the direction of hope, the confidence that there is a dimension to life beyond the reach of the oppressors.”

The cross is also a poignant reminder to the victims of injustice everywhere that God is present with them and on their side.

“Because God was present with Jesus on the cross, God was also present at every lynching in this country,” Cone says. “God saw what whites did to innocent and helpless blacks and claimed their suffering as God’s own.”

Hundreds of years later, the cries of the crowd, “Crucify him! Crucify him!” were echoed by crowds calling for a lynching victim to be tortured, hung, or burned.

The cries of Jesus on the cross, “My God, my God, why have you forsaken me?” have been echoed on the lips of the victims of violence.

“The lynching tree is the cross in America.”

The bitter irony is that the terrorists, the ones doing the lynching, were all too often in church on Sunday morning worshipping the crucified Christ.

We saw that in our soil collections for Warren Powell, a 14-year-old lynching victim. We met in the parking lot of the First Baptist Church in College Park, now a predominantly black church meeting in a building that was once used by white worshippers.

In those days the Klan held its meetings in the church basement. The same thing happened in white churches throughout the South, an abomination of the very Gospel they claimed to profess.

“How could white Christians reconcile the ‘strange fruit’ they hung on Southern trees with the ‘strange fruit’ Romans hung on the cross at Golgotha?” Cone asks, quoting the powerful song about lynching, “Strange Fruit,” made famous by Billie Holiday.

“How could the white Christian community reconcile ‘blood on the leaves and blood at the root’ with the blood on their consciences?”

That is a question that white Christians must ask ourselves.

If we are to be liberated, if we are to heal as children of God and as a nation, we must remember. We must tell the stories without flinching at their hard truths. We must honor the victims and those who fought and continue to fight for liberation.

If God could take the evil of the cross and transform it into victory over evil and death, then God can work through us, too, to transform the evil of white supremacy and bring justice, healing, and hope to all of God’s people. 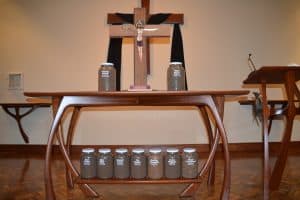